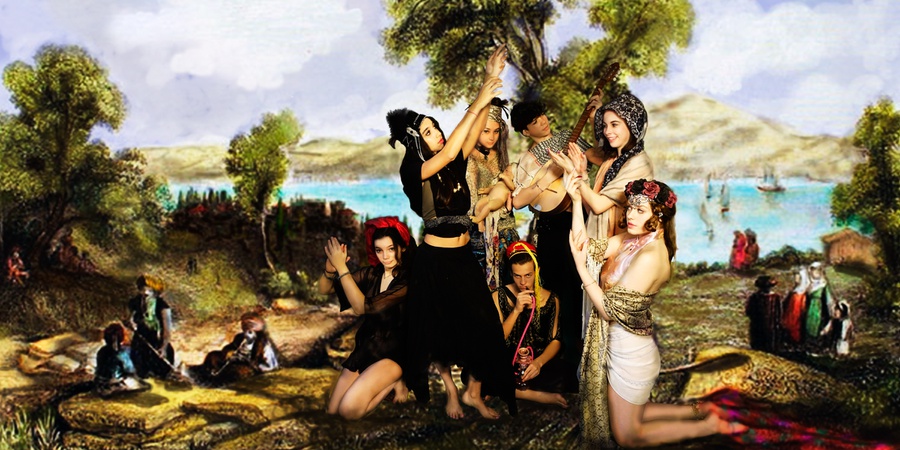 In this new body of work, Lydia Venieri pays tribute to Lord Byron (1788-1825), the English Romantic poet whose short life was an inspiration to many artists and who personified the ideal of the Romantic poet. With her considerable experience as a set designer and photographer, Ms. Venieri presents mixed media tableau vivant depicting scenes from Byron’s poems. This series exquisitely evokes the mystery and grandeur that surrounds Byron, dramatizing the timelessness of Byron's tales with the temporality of youth posed against the ancient landscape of mythology.

Fusing traditional painting with live models and digital rendering, Ms. Venieri’s photographs are printed on satin and then mounted on linen, creating a depth of rich color unique to this process. The legend of Byron, a symbol of freedom and timeless beauty, is thus revealed with the artistic technology of the 21st century.

Ms. Venieri was born in Athens and educated at the École Nationale Supérieure des Beaux-Arts in Paris. She has exhibited extensively in Europe and Asia, as well as New York. She is the founder of the Mykonos Biennial, which includes awarding the Byron Prize to non-Greeks who have have advanced Greek art.

Lord Byron died in Greece while actively involved in the Greek War of Independence and remains a great symbol of freedom to this day. Although a member of the House of Lords and recognized as one of the leading poets of England, he sacrificed his fortune and ultimately his life to win Greek independence. His death awakened the Western world to the political plight of the Greeks and led to the active involvement of the Western powers that led to the formation of an independent nation. Viva Le Byron!

Two hundred years ago, at the beginning of industrial revolution, passed the comet, Byron. The poet who made revolution a la mode, who inspired among others Verdi, Delacroix, Goethe, Dumas, Nietzsche, Dostoyevsky, Pushkin, Géricault, Poe and the rest of humanity. They adopted his brave altruistic spirit, which was fertilized by his courage and with his early death.

When the Byronic Big Bang exploded, the world was filled with extraordinary heroes with humanitarian momentum which continues to our days: vampires chained by their oaths, female Allegories, melancholic pirates and possessed poets.

Always in love, totally epic, secretly romantic, dying in magic faraway lands under the spell of tyrannical despots, tired from the eternity of the past, the Byronic Heroes dream a legend of freedom and love in which they will be immortalized in a poem, a painting or a song.